The “terrible” effect summer has on our teeth

The “terrible” effect summer has on our teeth

Our change in habits in the summer, especially the holiday period can cause more cavities and dental erosion.

The increase in consumption of sugary drinks, changes in food habits and a general neglect in brushing are the main causes.

Another risk for dental health is to remain too many hours in contact with the chlorine in swimming pools which erodes the tooth enamel.

Summer is the season more conducive for neglecting dental health because of changes in diet, increased consumption of sugary drinks and ice cream. It´s the arrival of summer, that usually leads to a change in diet, with a higher intake of carbohydrates, sweets and sugary drinks.

The results revealed that the imbalance in nutrition is directly associated with an increased consumption of sugars leading to a higher risk in dental caries.

Another study by the University of Valencia published in March in the European Journal of Pediatric Dentistry establishes a correlation between a frequent consumption of sugary drinks and the increase in early tooth decay.

Tooth decay is the most common oral disease among Spaniards. Between 92 and 94 percent of the adult population suffers from this, according to the last survey of Oral Health by the Spanish Dental Council. 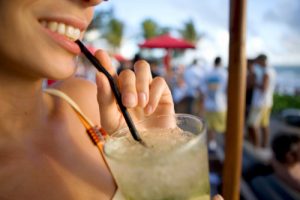 To avoid the risk of caries it is recommended that you brush your teeth after each meal, use fluoride rinses and dental floss.

“We need to accustom ourselves to always carry our toothbrush with us. In summer, it is just as important as sunscreen. But in case we forget our tooth brush at home and we cannot resist the temptation to eat something sweet in between meals then the least we should do is rinse our mouth in order to limit the appearance of bacterial plaque. .”

The caries are caused by an attack of acids to the teeth. They often appear in the enamel, but can extend to the inner layer of the tooth.

According to several studies, soft drinks also damage tooth enamel, although it is the prolonged exposure to chlorine in swimming pools which causes more dental erosion.

There are many myths associated with chlorine in swimming pools. There are those who believe that it improves dental bleaching, but what it does in reality is to erode the enamel, especially if your teeth spend so many hours in contact with the chlorine.

A research published in the Journal of Dentistry for Children indicated that 28% of children are suffering from dental erosion.

Amongst professional swimmers pool erosion reached 60 %. Consumption of carbonated soft drinks was the second highest in dental erosion: 40%, followed by orange juice, with 32%.

Among the factors that increase the risk of dental erosion caused by chlorine in swimming pools, what influences it most is the length of time of each individual swimming session, the duration and frequency of the workouts, the quality of the pool water and the type of substance used to chlorinate.

It has been observed that 3% of non-swimmers suffer from dental erosion, compared to 12% for swimmers and 39% for professional swimmers who compete on a regular basis.

Achieve a dazzling smile with Lumineers

You can find out more about which cookies we are using or switch them off in settings.

This website uses cookies so that we can provide you with the best user experience possible. Cookie information is stored in your browser and performs functions such as recognising you when you return to our website and helping our team to understand which sections of the website you find most interesting and useful.

Strictly Necessary Cookie should be enabled at all times so that we can save your preferences for cookie settings.

If you disable this cookie, we will not be able to save your preferences. This means that every time you visit this website you will need to enable or disable cookies again.

This website uses Google Analytics to collect anonymous information such as the number of visitors to the site, and the most popular pages.

Please enable Strictly Necessary Cookies first so that we can save your preferences!